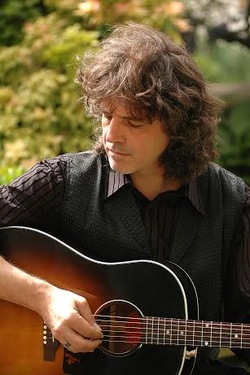 Born in France in the early 60’s, Claude Bourbon grew up in Switzerland, where he was classically trained for many years. This finger picking guitarist has performed and studied all over the world; he has crafted an unbelievable fusion of classical and jazz, with ethereal Eastern influences, Spanish and Latin elements with strains of Western folk.

The unique Monsieur Bourbon is a formidable performer. He may have his roots in the blues, but he is inspired by music and song from all around the world, taking these sounds and weaving them into a performance of blues, rock, jazz, songs and melodies that defy a label, all delivered with a gravely voice.

Claude’s inimitable style incorporates all five digits on each hand dancing independently but in unison, plucking, picking and strumming at such speed and precision that his fingers often seem to melt into a blur. Thousands of people in the UK, Europe and USA have enjoyed listening to this virtuoso and for the majority of his audience it is an experience that compels them to return again and again to hear and watch him play, as his fingers lightly dance over the strings of his guitar and create a unique sound that is ’Claude’