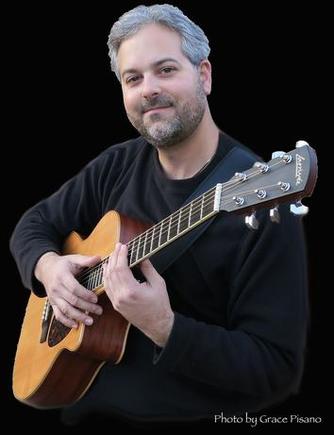 Glenn Roth is not your typical commuter from Connecticut. Instead of a briefcase, he carries a gig bag. His workspace is the vaulted splendor of Grand Central Terminal or the tunnels and platforms of the New York City subway system. A literal “underground” sensation, Glenn is a licensed performer in the MTA’s “Music under New York” program, playing for the most distracted and demanding audience in the world: legions of workers rushing to jobs throughout the Big Apple. And his fingers work magic, creating a soundscape of compelling melodies that invite them to leave the cityrush behind on an aural escape.  Glenn is a fingerstyle guitarist, his thumb riding the bassline and the melody driving all. His compositions suggest multiple guitars, but it’s really just one guy, ten flying fingers, one instrument. All instrumental, Glenn’s songs suggest moods and narratives that compel the listener to fill in the details.
Glenn has released three CDs to date: Innovations (2005), Busker (2006), and Into the Unknown (2010). His original compositions have been hailed as “sheer virtuosity” (20th Century Guitar magazine) and “delicate, accomplished solo acoustic guitar work” (PLAY: New Haven Arts & Entertainment Weekly). Glenn has shared bills with Stephen Bennett, Monty Montgomery, Tuck & Patti, Don Ross, Antoine Dufour, and Vicky Genfan, among others.”
Glenn plays regularly throughout the northeast and tours nationally & internationally as part of the 2014 Master Guitar Tour www.masterguitartour.com to bring his music to new fans and locales. Glenn just released a new "Another Dimension EP" in April of 2014.