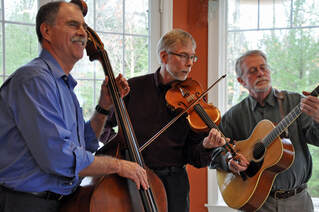 The Lost Acres String Band is a Connecticut-based trio (Gordon Swift, violin; Paul Howard, guitar; Jon Swift, upright bass) serving up a rich stew of songs and instrumentals from a wide variety of musics with the added spice of some exotic originals. The band honors the long American string-band tradition of the nineteenth and twentieth centuries while branching out in new directions. A typical show might include blues, Gypsy jazz, a Mexican dance tune, a romantic waltz, a contemporary piece for string trio, a haunting Hispanic ballad from the old Southwest, a classic string-band number by The Mississippi Sheiks, a lilting folk tune from Colombia, and swing tunes from the 1930s.


After study of Western classical and South Indian classical violin, since 1975 Gordon Swift has been playing fiddle, electric violin, and baritone violectra in bands ranging from jazz-rock fusion to reggae to country-and-western. Gordon holds a Ph.D. in ethnomusicology from Wesleyan University and blends musical influences from around the world into a distinctively American violin/fiddle style. He organized LASB in 2008 and writes the band's original material.


Master guitarist Paul Howard is a long-time member of the roots/Americana string band Last Fair Deal, with whom he has recorded five albums. Paul runs Valley Music School in Avon, CT and was a founding faculty member of the National Guitar Workshop with five music instruction books to his credit. Paul is an eclectic guitarist bringing influences from swing, old-time, bluegrass, and folk/rock music; he’s also an accomplished vocalist.

Jon Swift (Gordon's brother) is a veteran of the New England bluegrass and roots music scene. He was a founding member of the popular bluegrass band Traver Hollow, playing bass and singing with the group for 13 years. He has also sung and played bass or acoustic guitar in several other groups (currently BluesGrass and Deep Ellum) as well as performing solo. Appearing here on upright bass, Jon lays down a solid foundation for the band.