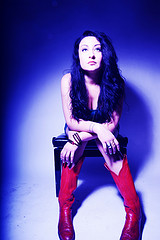 Mieka Pauley possesses a voice that flows like good whiskey and a frankness that makes Alanis Morissette look shy. She conjures up a sonic immediacy with the same masterful command as Ani DiFranco with driving, yearning melodies that stand alongside the work of Michelle Shocked, Neko Case and Emmylou Harris.  “My songs are like the actions that I can’t really take.” So says Mieka Pauley, a refreshingly candid artist whose vagabond background infuses her music.