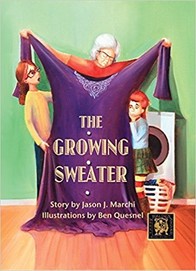 Author Beth M. Caruso grew up in Cincinnati, Ohio and spent her childhood writing puppet shows and witches’ cookbooks. Working as a Peace Corps volunteer in Thailand, she helped to improve the public health of local Karen hill tribes. She also had the privilege to care for hundreds of babies and their mothers as a labor and delivery nurse. Largely influenced by an apprenticeship with herbalist and wildcrafter, Will Endres, in North Carolina, she surrounds herself with plants through gardening and native species conservation.
Her latest passion is to discover and convey important stories of women in American history. One of Windsor is her debut novel. She lives in New England with her awesome husband, amazing children, loyal puppy, and cuddly cats.

Jason J. Marchi, The Legend of Hobbomock: The Sleeping Giant, The Growing Sweater, The Man in the Black Frock Coat, Ode on a Martian Urn, Childrens, http://www.jasonmarchi.com
Jason J. Marchi made his first professional sale, a poem, to Amazing Stories magazine in 1988. Since then Mr. Marchi has sold over 800 articles, stories, poems, and essays to magazines and newspapers, and won over a dozen awards--most recently from the Association of American Publishers REVERE Awards, the National Federation of Press Women, The Connecticut Press Club, the Shoreline Arts Alliance Tassy Walden Awards, and the Society of Professional Journalists.

In November 2010 Mr. Marchi's first collection of poems, Ode on a Martian Urn, was published and a year later his first picture book, The Legend of Hobbomock: The Sleeping Giant. Hobbomock gained steady approval from readers of all ages, and the book is used in dozens of classrooms in Connecticut elementary schools. The Legend of Hobbomock was recently recommended for the summer reading list by staff members at the Barnes & Noble stores in North Haven and Danbury, CT at the elementary school level.

Janet Barrett: They called Her Reckless: A true story of war, love and one extraordinary horse; Janet Barrett brings us the story of an incredible horse and the US Marine’s 5th Regiment during the Korean War. Janet’s first book is On The Fence: A Parent’s Handbook of Horseback Riding. Janet lives in Connecticut and has a new book coming out in 2019 - Comanche and His Captain.

Nancy Roman: Just What I Always Wanted and Lucinda’s Solution are well-regarded women’s fiction. Nancy also writes a blog and resides in Connecticut